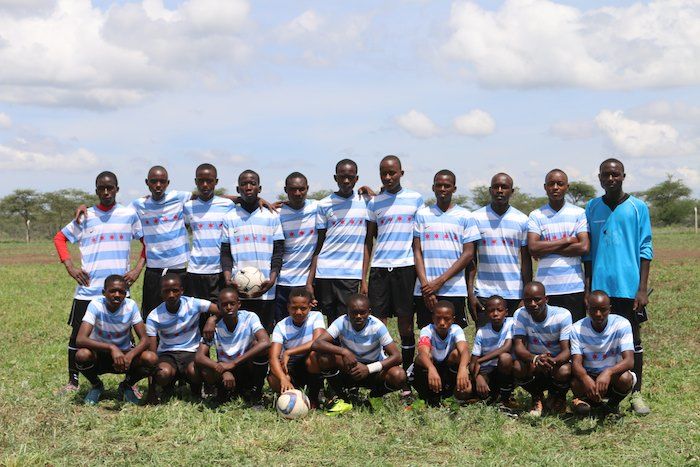 Tasiana Kabuka is a 16-year-old Form IV student here at Mungere School. Her passion is soccer, called football locally. She plays on the Mungere school team and holds the position of forward. Uniquely, she is the only female player on the team. So I decided to sit down to talk with her about her involvement with the team.
Tasiana, when did you first realize you had a talent for playing football?
“It was when I was in primary school. I was 12 years old. Many people began to tell me that I was really good so I started to encourage myself by playing more.”
Do you remember when you first joined the Mungere team? How did it come about and how did you feel?
“Our football field was not where it is now but over near the office. I saw some people playing there so I joined them. I felt really good because I was the only girl playing.”
How are you treated by the other players?
“They treat me in a good way because I encourage them and they encourage me too.”
Do you feel you have any advantages or disadvantages of being the only girl on the team?
“I think I have an advantage. Even if you ask my coach, he will tell you that when we have football matches, there are many people who have come to support the other team but end up being more interested in watching us when they see me as the only girl on the team playing and scoring.”
Do you think girls can compete with boys when it comes to football?
“Yes, I know I can compete with boys. For example, [Form III student] Hamisi cannot play the way I play.”
Do you think the discipline of sports helps you with your academics?
“Yes, because in sports our coach always teaches us about discipline.”
What encourages you the most to be successful?
“Having a dream encourages me the most, because I dream to one day be playing football for the Twiga Stars, our National Girl’s Team of Tanzania.”
What career would you like to pursue after finishing school?
“After I finish my studies, I would like to become a secondary school English Teacher in addition to joining the Twiga Stars football team.”
Tasiana considers herself to be a role model and often times encourages other girls to be like her by stepping out to do whatever they enjoy doing. Tasiana has been recognized as a great football player by her coach, teammates, and classmates. She has even been the recipient of the best player of the year award given by the FEMA Football Club whereby she was awarded new shoes, socks, and a certificate presented by the group’s leaders.
We salute Tasiana for her talent, ambition, and confidence!